Call for an Appointment

Salivary glands secrete saliva to mouth which facilitate mixing of food and swallowing. There are three pairs of major salivary glands. Surgical removal of salivary gland may be required when there is abnormal growth, block of salivary ducts opening due to salivary calculus or gland is affected by frequent attacks of infection.

There is a pair of parotid salivary glands in the cheek in front of the ear. Gland has two components, deep and superficial lobes. Facial nerve which is responsible for movement of facial muscles runs between these two lobes. Salivary gland excision is required when there is abnormal growth in the gland. Most of the swellings are in the superficial lobe and careful preservation of facial nerve is required as part of the surgical excision of parotid gland.

As in parotid gland, Sub mandibular gland also has superficial and deep parts. Deep part is in the floor of the mouth under the tongue and superficial part is hidden under the cheek bone. It is common for the gland to get blocked by salivary calculus. Abnormal growth is less common than parotid glands. Gland is excised by incision placed in the upper neck.

Lymphatic system is part of immune system composed of tiny network of tubes called lymphatic ducts and small nodules called lymphnodes. Tissue fluids generated by various organs are collected by lymphatic tubes and they get filtered at lymph nodes. Lymph node has large number of cells called lymphocytes and which has an ability fight against infection and recognizing foreign materials.

There are large numbers of lymph nodes in the neck. They can get enlarged due to infection, cancer and some degenerative disease. One of the enlarged nodes can be removed for examination by simple procedure call lymph node biopsy. However, as there are large number of important nerves, blood vessels and other organs travelling in the neck biopsy should be done without damaging to those important structures. 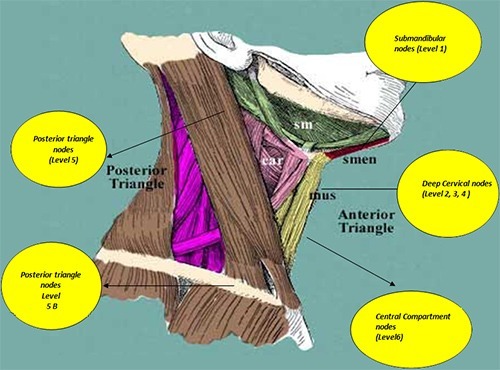 Excision of other neck lumps

Relative to other parts of the body neck is narrow and contain less space. However there are important structures in the neck which connect head and face to rest of the body through the neck. There are important blood vessels, nerves, breathing organs, swallowing tubes, muscles and lymph nodes connecting head to the rest of the body across the neck. Neck lumps can arise from any of these organs and because of that neck is common place to find abnormal lumps and bumps.

In children neck lumps are commonly due to developmental defects. Branchial cyst, Dermoid cyst and cystic hygroma are fluid filled cysts. Sternomastoid tumour is due to thickening in the muscle. Thyroglossal cyst develops from developmental defect of thyroid gland.

Your doctor will diagnose the neck swelling by physical examination. If your doctor suspects a nodule or a cyst, then ultrasound, CT scan of the head and neck or biopsy will be required to confirm the presence and define the type of tumour to provide the necessary treatment. Depending on the diagnosis some lumps need to be treated by surgical excision. 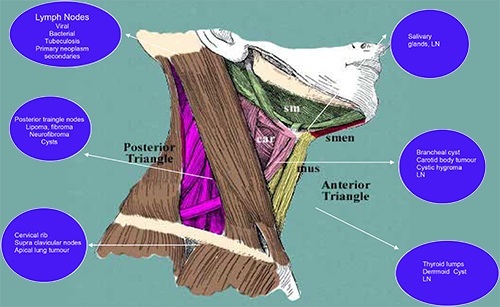